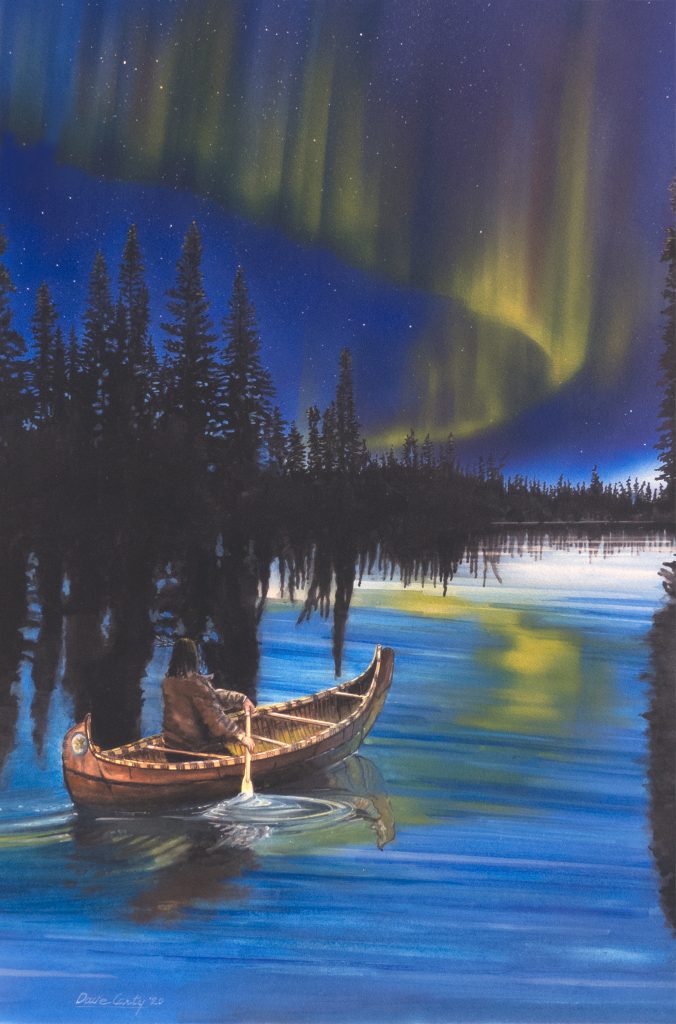 The Canoe and Its People

The Province of Manitoba is home to the world's largest, intact, boreal forest. There are many remote rivers running through this area with an abundance of wildlife, pristine forests accompanied by the peace and calm of mother earth. These rivers were, at one time, the natural highways of our forebearers and Indigenous peoples. The Bloodvein River, a Canadian Heritage River and currently being considered to become a United Nations World Heritage Site is highlighted in two of the paintings in the show. One of the paintings illustrates a De Havilland Beaver float plane and the Prospector canoe (originating from the birch bark design) that were both developed in Canada and are considered to be icons of wilderness travel throughout the world today.

The Indigenous people have used these river highways for millennia. The design and development of the birch bark canoe was, in no small feat, a marvel in design and technology. Our nation as it stands today was guided and built by the Indigenous, French, English and Metis of early Canada. The Canoe and its people played an immeasurable role in this, what we call Canada today.

David Carty graduated from the Nova Scotia College  of Art and Design in Halifax NS with a degree in Fine Arts with a minor in Art Education.  While attending  NSCAD he focused on Art Education, Graphic Design, Pottery  and Technical Illustration.  He studied under Nicolas J.  Sokcevic, the chief illustrator for NASA during the Apollo program.

Over the years David has worked as an illustrator and  graphic designer and worked on the early CGI systems, including the Dicomed - D38 Design Station, the  General Electric Genigraphics CGI system and, as well, Mac Computers. He has taught many children’s and adult art classes in  and out of school settings.

In recent years David has painted a number of large outdoor paintings across Canada.  Many of these murals have cultural  and historic significance requiring in-depth research  for accuracy.  He has found the research to be as challenging as the art process itself. David also works  as a Scenic Artist for the television and film industries.