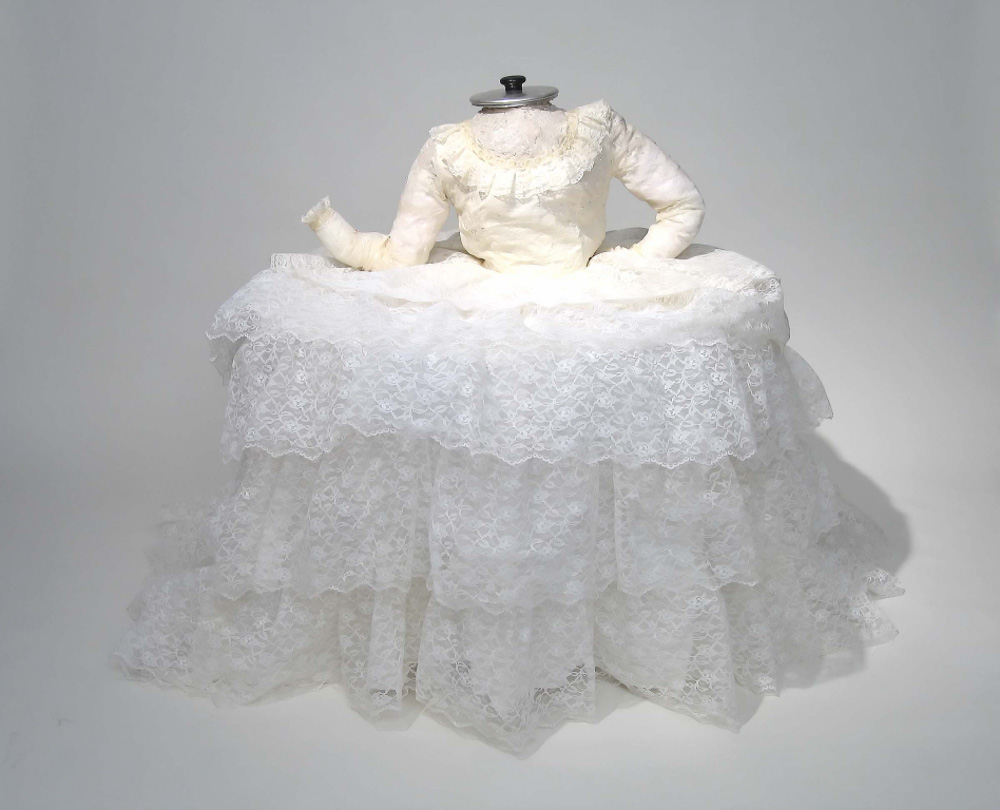 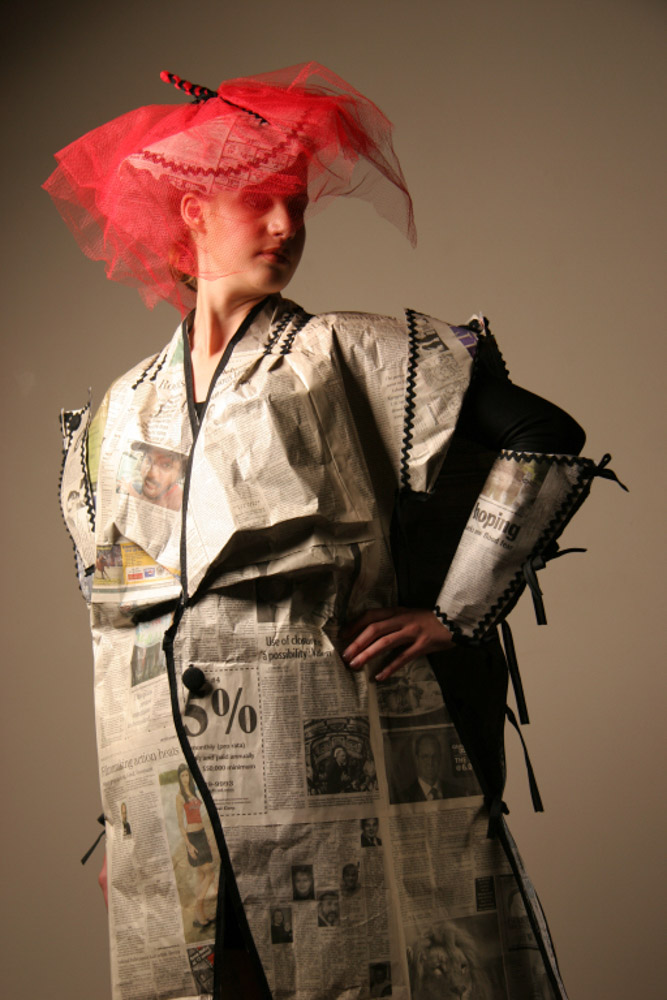 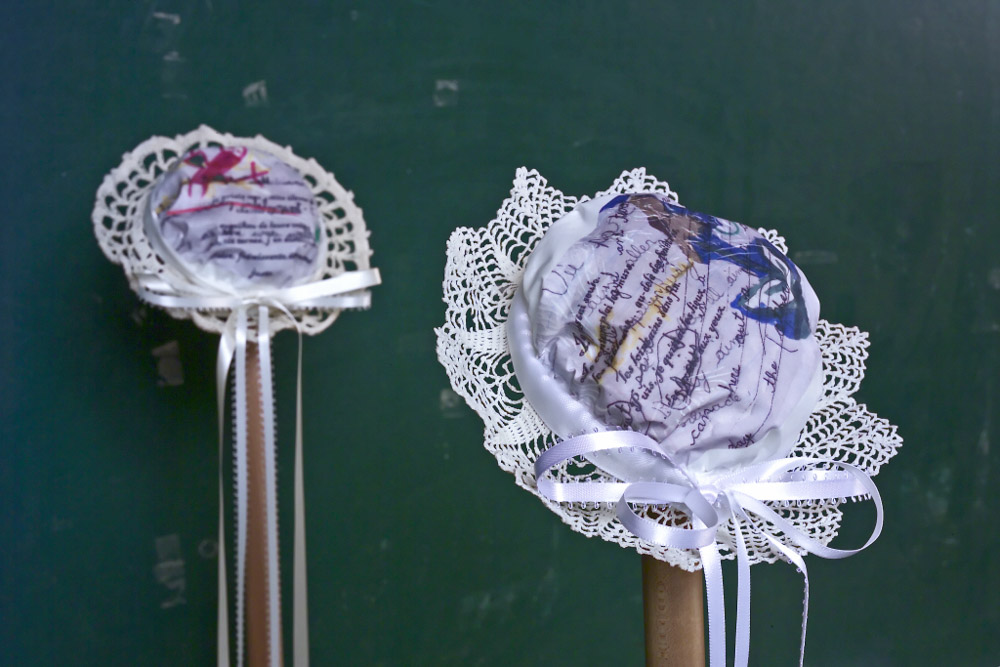 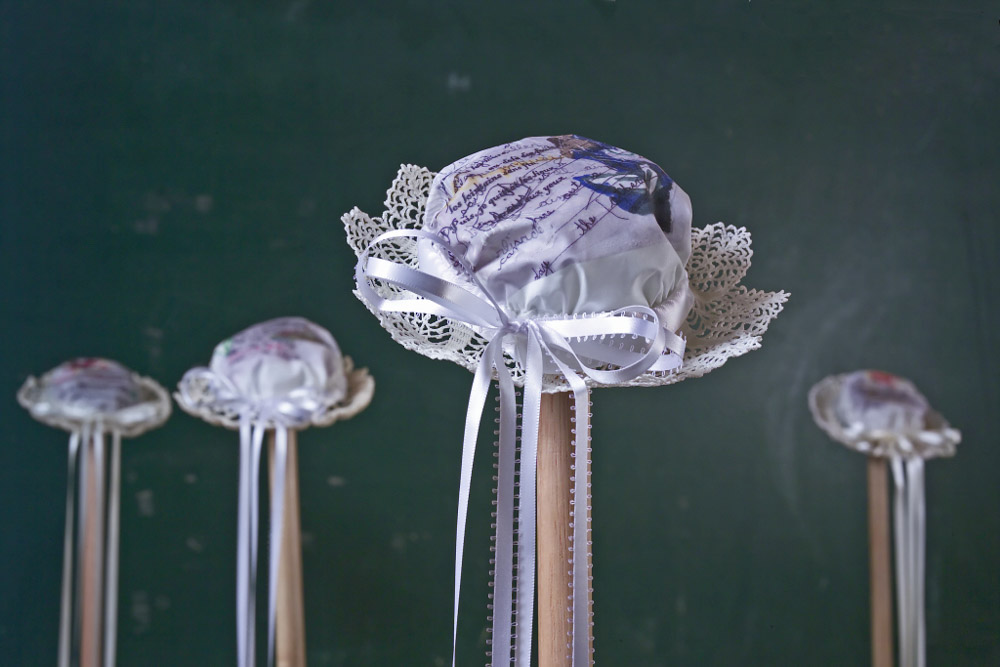 Multidisciplinary artist Colette A. Balcaen prepares to surprise us once more with her most recent solo production, La Dictée. It is comprised of an installation and a performance that plunge the viewer into a world that is very familiar to the artist – that of the transmission of knowledge in a minority culture.

An artistic relation between conventional objects is created by the way they are placed and how they are organized. The installation becomes not only an architectural and human way of inhabiting a space, of making a connection between an apparent space and a secret space, but also a means of communication, a kind of script that acquires new dimensions and incites questioning.

La Dictée inserts itself into this context. Using a school chalkboard and handmade objects – thirty miniature hats bearing texts written by children and Gabrielle Roy quotations - are lined up in two tight rows, reminiscent of the schoolgirls of her youth. Colette thus recreates the environment of the classroom as well as an artistic representation of it. In an adjoining room, off to the side but omnipresent, a portrait of Gabrielle Roy emphasizes the inspirational role of the artist and symbolizes that of the schoolteacher.

Audio recordings of female voices retelling stories from their school years, the influence of the school and the role of francophone minority society on their life choices make a link between past and present, the history of each of them and their daily reality. Using her performance in which the artist interprets the role of teacher, then of the poet, Colette A. Balcaen incites the viewer to become the actor, to explore his/her own life experience, thus rebuilding a collective universe and appropriating it.

Status symbol, symbol of vanity, conformity or submission, the hat becomes the main focus around which the artist’s process is defined. The ribboned hat fashioned for the model schoolgirl serves to denounce the role of religious and familial education of women on the artist’s generation and preceding generations confined to the role of mother or other traditional work. Out of this oppression, this suffering, bursts forth the desire to vindicate the work of women and free them to make their own choices.

Using this installation, Colette Balcaen does not limit herself to presenting a context, she recreates a concrete version of it that allows us to question, understand, advance and help women progress along with society. She does so with conviction and humour, moved by passion for her language and her culture and a great respect for the privileged relationship she has with her mother, who reminds her that Gabrielle Roy had this same relationship with her own mother. Other similarities between Colette and Gabrielle are the fact that they were teachers first, and both of them embraced an artistic career, one in literature, the other in the visual arts.

In choosing the installation as the way of expressing her topic, Colette Balcaen works deliberately in the line of female artists such as the American Judy Chicago and her table of richly decorated plates (Dinner Party) or the Québécoise Francine Larivée with her installation leading to the bride (La chambre nuptiale), who wanted to introduce artistic space and installations that would validate and consecrate a feminine universe as defined from the inside.

Parallel to the artefacts, words retain all of their force and power for Colette Balcaen. Their integration, and even their juxtaposition over her work serve as a striking statement. They reinforce her visual message and, removed from their context, allow us to question the conventions that they carry.