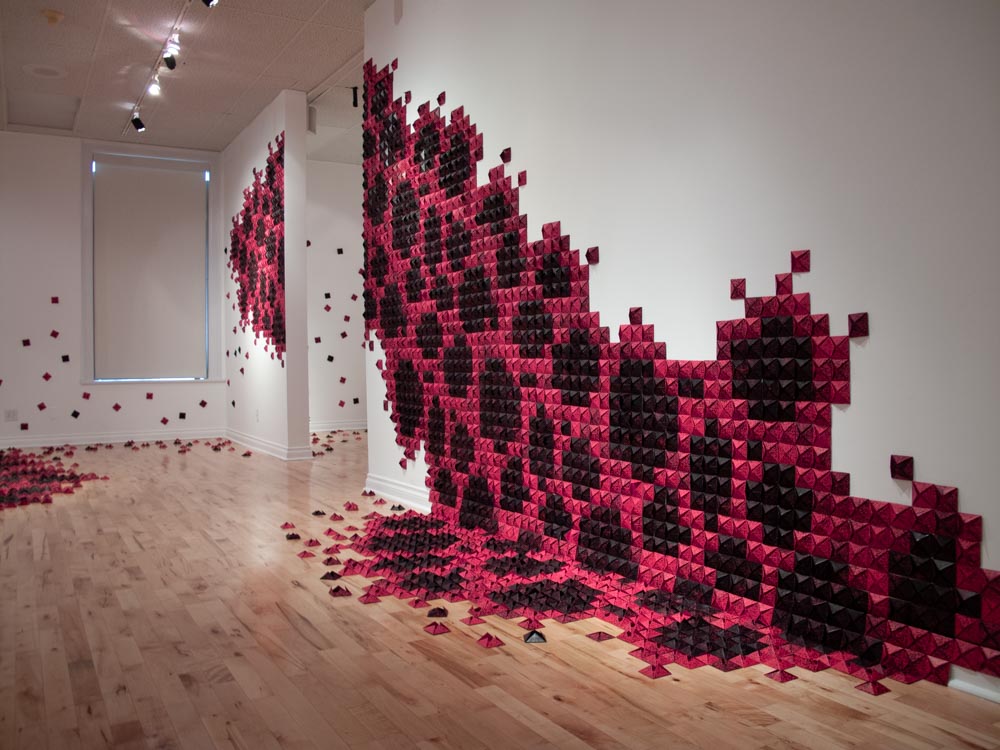 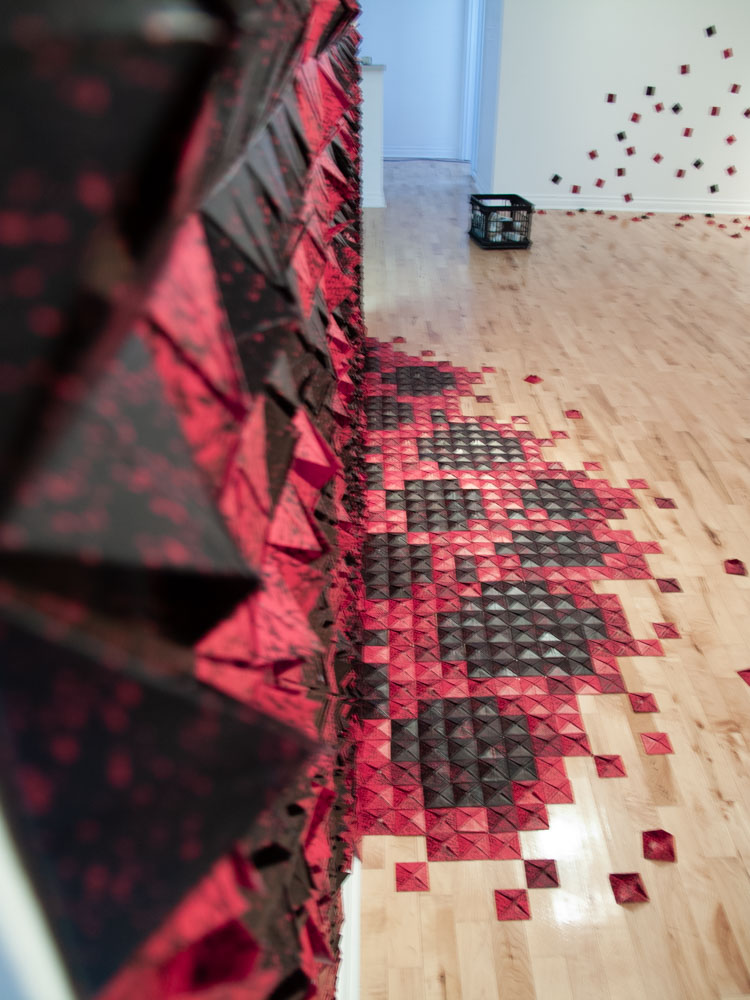 Move freely within an image. Enter into this space to experience three dimensionality. See a work emerge within the confines of the real and the virtual. That is what the Chambre matricielle (Matrix Chamber) is!

Andrée-Anne Dupuis Bourret’s installation, a work of patience and meticulousness, reveals an intriguing cartography composed of thousands of small, red and black paper units. The silkscreened papers that make up each of the elements are all folded in the same way; fine black lines on a red background represent lineaments in dynamic and abstract shapes that are more or less dense. Cleverly assembled in space to resemble fractal images, these units also act as pixels of a digital image as well as the element that constitutes this basic component. Within this visual synecdochical interplay, the pixel-units build up, recomposing and reconfiguring the gallery’s architecture, thus conceiving regions with a high modular density here, and a lower density zone there. The dynamic chromatic nuances of this cartography create formal rhymes and rhythms that accentuate the effect of the proliferation of these numeric cells. The effect of proliferation is not menacing. It is inviting, almost hypnotic!

But where are they taking us? Into a nearly liminal space where the fusion rather than the juxtaposition of two universes occurs. The placement and uneven space between the forms and the ensuing relief transport us to open spaces where organic architecture that is infinitely large immerses us in its grandeur and its splendour. Simultaneously, these pixelated configurations propulse us into another parallel dimension: a virtual space. Though the work strongly evokes a virtual dimension, it is not technological per se. By conjuring a surreptitious exploration of territories touching on the limits of the real and the virtual,  the artist appears to be thumbing her nose at convention by simulating the three-dimensional image using two-dimensional objects on one hand, and on the other hand, using analogue techniques to infer the virtual. Print is used as a low-tech technology and the artist is the program that generates the image by creating a space. This mechanical process simulates the world of programming and the virtual. As, throughout the exhibition, we are moving in a tangible and real space made up of paper units placed on the walls and the floor of the gallery.

At its core, the Chambre matricielle goes far beyond a simple simulation of space, and offers a profound reflection as well as a criticism as to how technology modifies our relationship with space.

Andrée-Anne Dupuis Bourret approaches creation from the standpoint of a reflection on perception and occupying a space. Her projects assume a number of different forms: in situ installations, sculptures, fixed and animated images, artist books. Her works have been presented in a number of individual and collective exhibitions (Canada, United States, Israel, Australia). The artist, recipient of a Governor General’s gold medal for her master’s in 2011, is currently working on her doctorate at the Université du Québec in Montreal on the subject of modular printed installation. She has also written two research blogs: Le cahier virtuel and Le territoire des sens.